Tonight, I joined the Trail Maniacs group for their Thursday night Tubbs Hill run. I arrived at what I thought was the rendezvous location in Coeur d’Alene, Idaho – which was indicated as “The Moose on 3rd”. Being new to the area, I was planning on parking near 3rd, and trying to locate this moose.

As luck would have it, I spotted a moose right on the corner of 3rd & Sherman. Even more luck, there was a parking spot right there, too. Pulling my jacket on, as I left the car, I spotted another runner waiting for the group. As we chatted some, it became clear we had the wrong moose. I offhandedly asked if there was another Moose on 3rd that we should look for, he mentioned there is a moose at the base of Tubbs Hill.

The Right Moose On 3rd

As the clock was just passing 6pm, which was the designated run start time, we ran to the other moose. While we approached the proper moose, we could see a group of runners in the light a little ways away. The two of us arrived at the proper moose, and began chatting. Dave, the group organizer, decided upon a better meeting point location. Rather than meeting at the moose, the rendezvous spot would most likely be set at the bathrooms for future runs.

Being that this was the first time I ran Tubbs Hill, I was not hoping to run the route in one direction or the other. Apparently, there is a “normal” direction, which would have had us finish down a steep, slick hill. Instead, we started up the steep, slick hill. The trail was pretty easy to navigate, despite the rain and snow.

A couple times while on the Tubbs Hill Run, my left shoe untied itself. After taking a moment to re-tie the shoe, I would push the pace a little more than previous sections of the run. Some sections of higher speed running were rather treacherous!

Before we hit the home stretch, we stopped to snag a couple photos of the Coeur d’Alene Resort. The view was awesome, and very worth stopping the run to take in the sight. 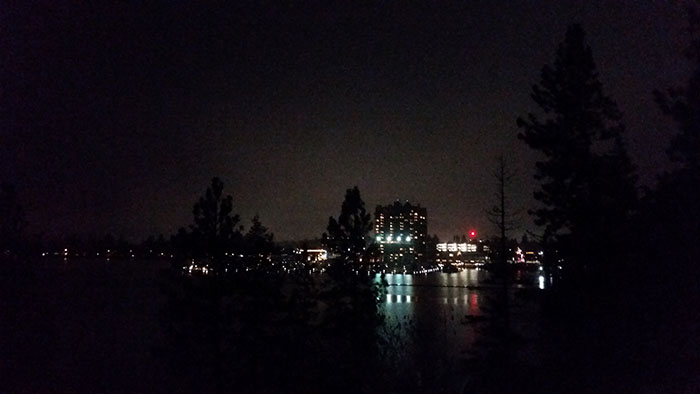 I can’t wait for the next Trail Maniacs run, weather permitting. I hope to have another opportunity to run Tubbs Hill, maybe during the day, to enjoy this 1.9 mile trail again. It is amazing what a good run can do for my mood, even if it is rainy, slick, and slushy! In hindsight, Yaktrax would have been a good addition to the run tonight.

Be the first to comment on "Tubbs Hill Run – Trail Maniacs"