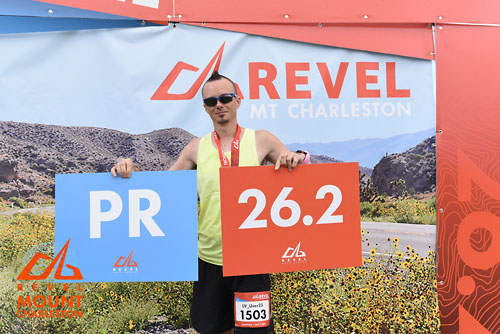 Runners, get ready; there is a hair over two months left until we race Revel Mt Charleston 2017! I have not gone this long between races in far longer than I can remember. Racing often kept me running often, and trained to a nice level. In 2017, I have been able to get a little more consistent from where I was to close out 2016. I still have some time to put in work, and give the marathon my all at Revel Mt Charleston 2017, once again.

I hope to get an updated photo with the Revel PR signs in April.

Unfortunately, if you have not already registered for this extremely fast marathon you will have to go on a wait list, or hope for a bib in 2018. Last I read on the Revel website, there were still half marathon slots open.

From what emails, and the Revel website have stated, the finish line is at a new location this year. That should give the runners a better route for the final few miles of the race. Could end up being a two-fold bonus for all of the runners. Will be great to run into (hopefully not literally) many of my Las Vegas friends before, during, and after the race. It seems like some of my family, who have never seen me race, may be traveling to see us cross the finish line. Wonder how many friends we will see?

My wife, Jet, will also be racing for the first time in even longer than me. This will also be her first race since having our amazing daughter! She is coming back from a foot injury, and a very icy winter of training attempts. I hope she has an injury free Revel Mt Charleston Half Marathon.

Something else that is awesome about Revel races, they give away free race photos! So much nicer than having to purchase them, or do the not-quite-ethical screen capture of your photos. Just one more benefit of the Revel Mt Charleston Marathon 2017!

Is this your first year running down Mt Charleston? Check out my Mt Charleston Race Report from 2016, and get an idea about how things were last year.

Something I did not put in my race report, was some info from the Revel website.

I did not realize just how bad my stomach issues threw off my position in the pack. I was 64th across the starting mat, climbed to 48th overall by the time we crossed the first quarter of the race’s timing mat! Shortly after that my stomach tanked me, and I dropped 139 places. Ouch. It looks like I was steadily passed as we closed in on the finish line, too. Around the race’s 3/4 mark, I gave myself permission to take it easy, and not get injured going into the “four marathons in five weeks” series I had planned.