There are a few things that make the Crater Lake Marathon unique. One such item is their registration process. Runners must mail a physical entry form & a check to cover your entry fee via USPS, and wait. Did I mention that you have to wait? And keep waiting. And wait some more, until you can’t take it, and contact the organizers, to find out whether you got in, or not. Ready or not, 2016 Crater Lake Marathon, here I come! 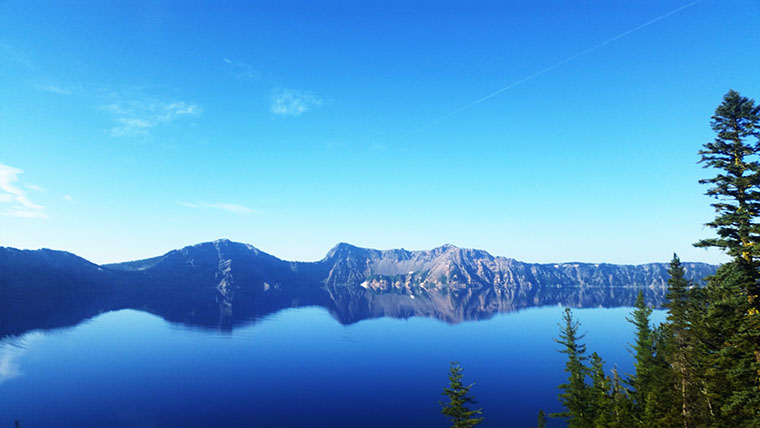 Aside from the registration process, the views you will have before the start, and throughout the race are astonishing! Crater Lake has so much natural beauty, that you can almost forget how tough of a race it is. Almost.

Most races that I have had the pleasure of running have lodging relatively near the start, and/or finish lines. When looking for accommodations for my 2016 Crater Lake Marathon attempt, I was too late for the park’s lodging option. So, I had to look in the surrounding area. I forgot to map directions from where potential rooms were, to the race, until after we checked in. This was a particularly bad mistake, given we arrived at the hotel later in the evening that we had wanted to.

Our commute to the start line was going to be over 90 minutes. Whoops. Following a midnight beating run, to keep my run streak alive, I passed out as quickly as I could, so I could get at least a small nap in before the race.

Arriving at Crater Lake National Park before the sun peaked over the horizon was quite a sight. We drove a fair portion of the course around to the bus pick-up location. Parking, we got out, stretched some, made sure I had all of my gear (did not want to repeat Lost Dutchman!), and waited in the bus line. Bidding my wife adieu, for now, I boarded one of the buses with many other runners.

Being unhindered by driving responsibilities left me a great opportunity to gaze out the windows at the scenery we would shortly be running through. 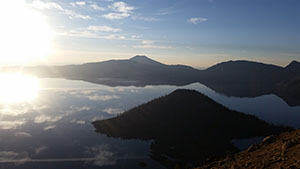 At the start line area, a large overlook area gave us an amazing view of Crater Lake, as well as the sunrise. As I took in the views, something caught my eye. Very unexpectedly, I spotted a Calico Racing event t-shirt! Who would have guessed I would see one of Joyce’s event shirts in Central Oregon?

Striking up a conversation with the Calico Racing shirt wearing runner, and her friends, we chatted a bit about races, goals, and the like.

Photo taking, chatting, and stretching had all about wrapped up. It was near time to start this race!

We lined up at the start line, as we heard about the Grand Marshal, who had ran Crater Lake Marathon many, many, many times, but was unable to this year. In order to keep his involvement in the race going, he was brought on as the Grand Marshall.

This race is not chip timed, so there was no timing mat, or chip to worry about. Just the sound telling us all to start running! At the beginning of this course was a bit of road construction. Due to said construction, there was pavement torn up, ground down, and sometimes missing all together. This was not such a bad thing, as it helped keep me from sprinting too fast up the initial hill. 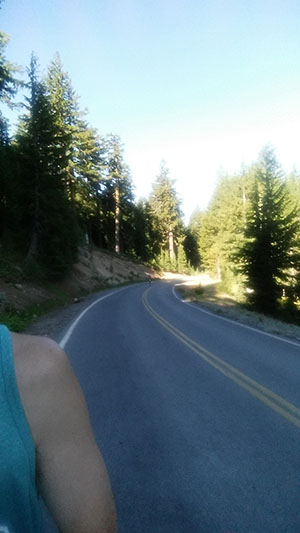 As I learned running around Lake Mead for various events, lake loop routes are hilly. With that being said, I was running very well, and loving the course. Peaking from between trees, Crater Lake would come into view, and take my breath away.

While we ran past wider sections of the course, or those with parking sections families, and other spectators would gather. Much like other smaller/rural races (Sand Hollow Marathon comes to mind) – we would see the same batches of spectators, as they leapfrogged us. 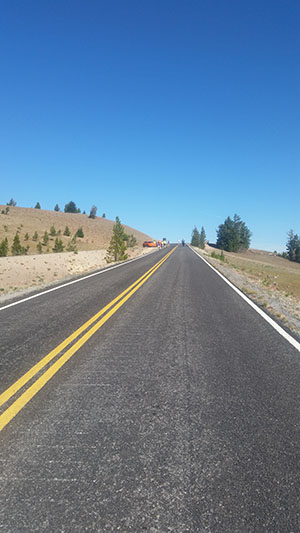 Climbing one of the out-and-back sections, I passed an aid station. The worker asked me if I wanted/needed any hydration, I asked for whiskey, which caught him very off guard. He started whole heartedly laughing, and said he would remember for next time. On the return trip, he said the whiskey was on the way, as we shared another laugh.

Descents are always the fun part of running for me. I love to let gravity do most of the work, all I have to do is turn my feet over quickly enough to keep from face planting on the pavement. On one of the longer descents of the 2016 Crater Lake Marathon, I was moving quite well. Some of the other runners that had been ahead of me for the entire race started to fall behind.

I missed the memo…

There was a route change that I was unaware of, which ended up shaking me mentally. During the entire run, I was expecting the final miles to be an uphill to downhill out and back. With the construction surrounding the 2016 Crater Lake Marathon course, that changed.

Sometimes, it there is one thing that kills a runner’s race effort. Other times, it is a collection of small events that compound by the end of their 26.2 mile journey. This race, it was a compounding effort that threw me off my game.

Let me explain, as I finish this race report.

Strike 1: Arriving at the hotel late, I did not have a chance to figure out what I was going to have for pre-race nutrition from a locally sourced location. While I had ran fasted marathons before, Crater Lake is not one I should have attempted fasted.

Strike 2: As previously mentioned, arriving late, gave me less time to sleep the night before the race, or even relax, and unwind. My body was still rebelling a little from the road trip down to the race.

Strike 3: The finish was supposed to be at the end of a 4 mile section, half climb, going into a downhill finish. That’s my bag, baby! That changed, and I did not realize it until way too late.

Strike 4: Yeah, very out, I know. By the time I made it to mile 22, the temperature started to rise. Add to that being unaccustomed to running at elevation, those last 4.2 miles were a large pain cave.

Back to your normally scheduled race report

At mile 22, we ran past the finish line offshoot from the main road. My wife asked if I wanted more support on the course, and I told her I was good. It seemed like I would see her in just a little bit. I found out later, at that point in the race, I was in the top 15 overall. Wow!

I knew I was in trouble by mile 23, when on a descent, I could not run. The Wall had found me, and was proving a worthy adversary. When I had to stop to rest on the way down the hill, I started to be a little concerned. The route change finally sank in, and shook my mental game.

Finally reaching the turn-around point, I began the arduous climb back  to the finish line. It seemed like every 10-15 yards, I would have to go off the course, and sit in the shade to collect myself. Convincing myself I would not finish if I sat there, my legs would resist, before slowly helping me continue up the course.

I went from a sub-10 minute per mile pace average for the first 22 miles, to a 17 minute mile per pace for the last four miles. My overall standing dropped to 52nd by the time I was able to finish the 2016 Crater Lake Marathon.

Apparently, with my shade sitting, a lot of people did not realize they passed me, which was freaking my wife out, as she was asking runners if they saw me, which they did not.

Due to her pregnancy, and a foot injury, she deferred to run the 2017 Crater Lake Marathon, which I am grateful for. She could have had some serious complications had she attempted the race out of stubbornness.

I am somewhat disappointed in my placement, but satisfied in the knowledge I did not quit. Finishing a marathon is always a challenge. Runners truly must respect the distance.

Some other photos from the 2016 Crater Lake Marathon 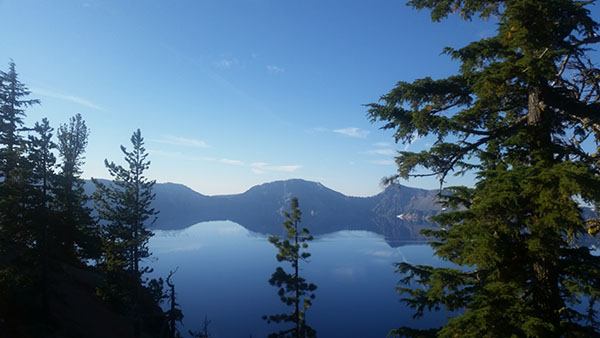 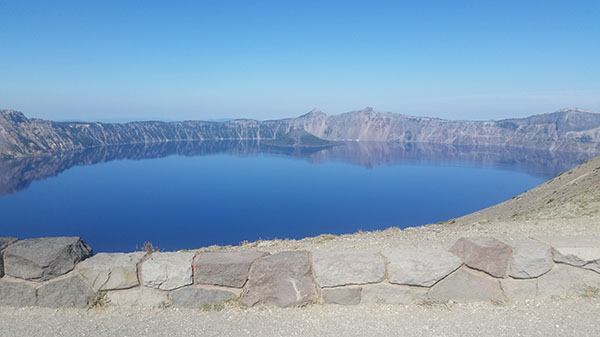 Be the first to comment on "Race Report: Crater Lake Marathon 2016"