I have ran many races, and many races multiple times. For 2016, my third consecutive Sand Hollow Marathon effort was going to happen. Despite the number of races that have kept me busy the first part of the year, my overall training had been nearly non-existent.

Going into Sand Hollow Marathon, I worked on tempering my time goals. Enjoying the drive up from Las Vegas, the course went through my mind, replaying tough sections, picturing areas that need the brakes pumped, and areas where the throttle needs to be mashed as hard into the floorboard, as possible. My game plan was firming up.

One small gripe that I have had over the past three years running this race is accessing packet pickup. The location is easy enough to find, as is parking. However, getting INTO the packet pick up venue is unmarked, and a bit of a pain. This marathon race weekend also coincides, annually, with a cycling event. As such, the front entrance is blocked off. Back entrance doors are locked. In order to enter, you have to walk all the way around the building, and enter through a side door. Not very friendly to competitors.

After cracking the “how does one get into packet pick-up” challenge, registration is quick, bib was received, bag, shirt & flyers acquired without issue.

Following a confusing dinner, by confusing, I mean… The restaurant was called Prospector’s Place. It isn’t adorned as one would expect, with classic western decor. Outside of the long wooden dining table, the rest of the tables were simple plastic, folding cafe tables. The food was good, as was the service.

Back to our room, I laid out my race gear before heading to sleep. As with most race nights, sleep was a bit elusive, but did the trick. Waking up with my alarm, in the wee hours of the morning, I got up, and started my morning routine for race day.

Once I was dressed, and ready to go, we headed to the start line. Like previous years, the runners amassed in the halls of the community center, steps from the start line. With a few minutes to go, we all wandered out into the cool morning air. Before we knew it, race instructions had been given, and the starting command was given. 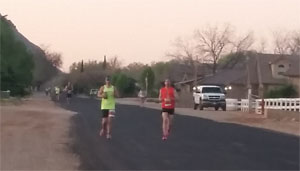 He couldn’t put distance between us.

Trying to not let the start line enthusiasm get the best of me, I monitored my pace & effort, to keep myself from blowing my legs up too early. Keeping an eye on another Vegas runner that was talking up his goal of an age group podium finish, I contemplated pacing with him. Deciding against that, I kept with my plan.

Running steadily through the neighborhood, and around the farmland, cool, calm dawn air greeted us. Despite the city being named Hurricane – this was the third time running this race without the crazy winds people have told me haunted them in some area triathlons.

I made my way around the course, following the course markings that were a great, great improvement over previous years. Big, chalk arrows guided us around corners, and toward the finish line.

Enjoying the descent along the highway, the sun warmed me up, but not so much as to make it a miserable day. Gravity was my friend, allowing me to glide down the road, oncoming traffic thankfully stayed on their side of the cones.

With almost perfect comedic timing, I was running within earshot of a trio of runners who were talking about how they aren’t really paying attention to where they are going, just watching other runners, and following them. This, they stated, was an issue, because nobody was in front of them at this point. A housing subdivision, with paved roads, but nearly zero homes constructed was all around us. This is an important fact, as the trio missed a right turn they were supposed to make!

As I was making the right turn, I was able to yell loud enough to get their attention, and hear them laugh about the timing of their conversation, and missing the turn. This was toward the halfway point, for the girl of the trio was just “passing through” on her half of the marathon relay. No wonder she was unconcerned about sprinting down that road. 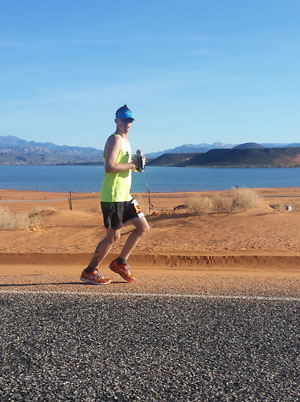 This is where my mind and body had to come to an agreement. In 2015, I was running fine through Mile 15 – on the first of the two climbs out of the Sand Hollow reservoir basin, my calves started cramping bad. Sand Hollow Sufferfest started there, and continued to the finish line.

2016 was to be a different year! My electrolyte intake had been better this year, and my calves weren’t giving me any issues to that point either. Cruising up the first hill, where I had David continue at his pace last year, I was feeling pretty good. Climbing the second, longer hill, I ran/walked up to the highest point. No sense in killing my legs on a climb, when there was still a bit of the race left. Another runner shared this strategy with me, chatting some as we climbed.

Approaching the apex, I started hearing one of my sayings in my head, “run like a roller coaster. slow climb, then let gravity do the work.” I could almost hear the roller coaster ratcheting as I neared the top of the hill. As I crested the climb, my stomach felt like it was floating on 0 Gs, just as it does when the roller coaster starts its gravitational acceleration.

Descending from that vantage point, I focused on my breathing, my cadence, and making sure my body was feeling good for the rest of the race.

With approximately 8 miles left I was surprising myself with both my pace, and how great I felt, considering my 3rd Overall in a tricky half last weekend!

Settling into a comfortable pace, I kept my legs moving, while working hard to not stare at my Garmin. Somehow, on this course, on this day, without miles, and miles of screaming spectators, my legs were carrying me at an amazing pace.

Dropping back into the neighborhoods of Hurricane, Utah, the course took us past homes with kids, dogs, chickens, horses, and more.  Gone was the confusing Y shaped intersection where runners got lost each of the last two years I ran this race.

Closing in on the finish, I recognized the streets before us. The finish line was within ear shot, and that surge of excitement that I was almost done, coupled with the realization of my finish ETA, my pace climbed higher. Following a brief stop to stretch my legs, with a little over a mile left, my pace jumped from a 10 something minute per mile pace, to a mid-7 minute per mile pace! 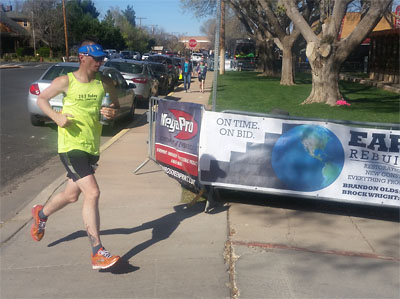 To have that much energy at the end of a race felt spectacular. My body was not rebelling, it was holding together quite well. Now, my eyes took a sneak peak at my Forerunner 220, average pace was well below what I held a few short months ago in New York, at the TCS NYC Marathon in November, 2015.

Once I was on the last straight, I kept the increased pace going. Crossing the finish line roughly 11 minutes faster than my previous personal best was incredible! Despite my fears of repeating my 2015 performance, I not only broke 4 hours at the Sand Hollow Marathon, but I went sub 3:50! 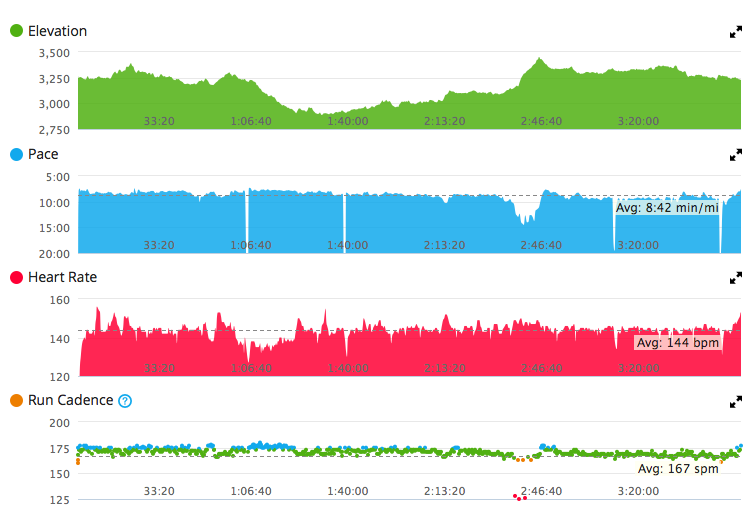 Be the first to comment on "Race Report: A PR Effort Running The 2016 Sand Hollow Marathon"