With the hectic past 12 months, my race schedule has been reduced significantly. In 2016, I raced quite often, going so far as to complete four full marathons in five weeks. Then came the move, crazy work hours, and a lack of available races every week. That didn’t stop me from going for broke at Saints & Sinners Half Marathon 2018.

Another pair of moves followed that transition to the Pacific Northwest, bringing the family back to the Desert Southwest. Aside from a poorly executed (on my part) marathon in November, 2017 – I had only completed one other race in nearly a year – another poor outing on a perfect day in Ogden.

I went into the 2018 Saints & Sinners Half Marathon with high hopes. The last time I ran it, I inadvertently left myself without a new PR. For that race, I went out with no game plan, just run & turned out close to a personal best. So, with that in mind, I wanted to absolutely smash through my half marathon personal record of 1:33:xx, with a goal time of 1:25:xx.

Getting to the start about the time the organizers were ushering runners to the start corral, I had to rush to get to the start line. In my rush, I still managed to spot some of my favorite Sin City Road Runner friends. Taking a moment to chat with them, before trying to reduce the amount of traffic in front of me at the start.

Well, that plan didn’t work out, as I was making my way to the front, the gun went off. Everybody took off, and there I was, amidst a sea of runners. Going against every race plan out there, I juked, and bounced around runners that were not as enthusiastic about running downhill as I was.

Before long, there was a small pack of us running at similar paces.

During the one decent climb on the course, I followed my normal strategy of slowing down some. It was about this time that I realized there was a problem brewing. While on the Whiskey Basin 88k Group Training Run a short while back, the sock/shoe combination lead to a nice blister on the side of my left foot. Not being wise, I wore the same socks for this half marathon. By mile five, the blister was back, with a vengeance.

Hitting the Six Tunnels Trail is one of the most scenic portions of this race. With the out and back runners are able to see friends, get an idea for approximate race position, and the views. Wow, the views.

I was a little bummed, normally, as you run through the tunnels, the sounds of bats hanging onto the ceiling can be heard. This time, either I wasn’t paying enough attention, or the bats were even more quiet than normal. The dusty air lingered in the air, as each runners’ shoes kicked up the silt lining the old railroad tunnel ground. 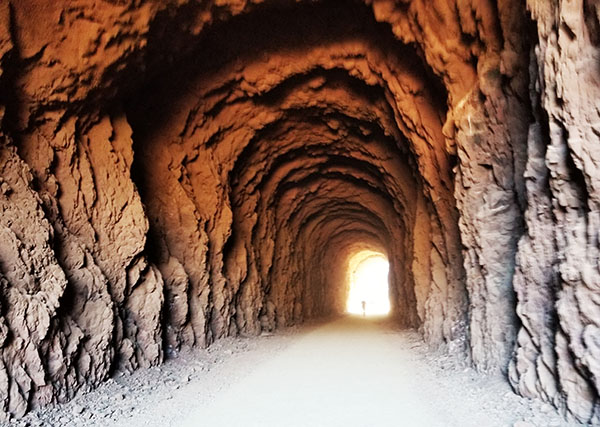 My gait changed, as I tried to prevent the blister pain from being too sharp. This was a mistake, as the change in gait caused some knee and hip discomfort. Pushing on, I moved as best as I could, while trying to remember that I was more than halfway done.

On the way back, I waved at more friends, cheered them on & kept an eye out for my wife. Unfortunately, I didn’t get a chance to see her, before we split off to go around the horseshoe parking lot, toward the finish line. This is one of my favorite sections of the course, as I have ran it many times, and previously had a nice kick available during these final miles.

This year, due to the blister caused gait change, I was not as spry as I wanted. Some slower paces crept into my race, until a guy ran past and urged me to race him. Sometimes that’s all it takes, a bit of encouragement & additional energy feeds into the legs (or is it more a mental help?). I pushed it with him as long as I could, until I couldn’t (or wouldn’t).

That is, until I made it to my most favorite part of this course, the final right turn, down the hill, to the finish line arches. This turn always gives me that final kick of energy, allowing me to float down the hill. As always, I chose the Sinners side of the arched finish line, for a respectable 1:40:xx finish time.

Another tradition that we have, when my wife & I both run, is that I will then run the course backward until I catch up to her, and help her finish the race. This gave me the chance to say hi to even more friends, grab some photos of them, and cheer on more runners. I did feel a little bit like a show off – however – it was all worth it. Jet was on the final portion of the Six Tunnels Trail when I caught up to her, and we finished the last 5k together.

Not a bad day for almost 20 miles! 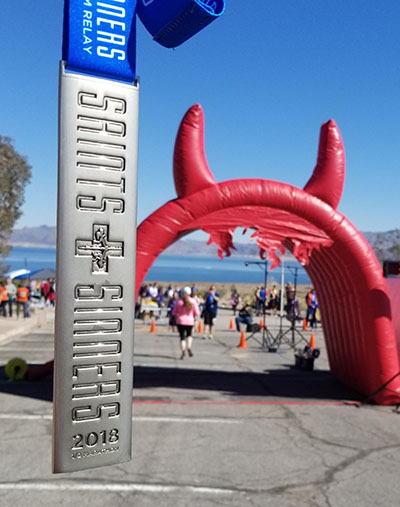 Be the first to comment on "Race Report: Saints & Sinners Half Marathon – 2018"