Hubris is a powerful force.

Looking for a race, I came across the Desert Dash website, and their Blood, Sweat & Beers races for 2016. Always up for a challenge, and great value, their Dirty Double would allow me to do two races, for only a few dollars more than a single race. Why would I NOT sign up to do two full marathons on a Saturday?

Fast forward to race morning, as I stand in line with a small gathering of trail runners, looking to tackle the Bootleg Canyon course this morning. Talking with a friend that was working the registration table, she was shocked at my attempt. Not because of the distance, she knows I can run. But due to the technicality of this course. I reassured her that I was not going to run it like road race, rather, I was going to take it easy, and just enjoy the desert trails.

Walking back to the car, I talked with Benji (@lvtrailrunner on Instagram) for a bit, who was also signed up for the Dirty Double. We wished each other well, before continuing about our pre-race preparations.

For this race, I had my GeigerRig Cadence with me, full of 1.5 L of water, along with a Camelback belt, and another 20 ounce bottle of Gatorade. Starting off, a group of us had a decent pace, trailing Joyce Forier of Calico Racing fame. We chatted, and ran, until the trail opened up a little, and I went off at a more natural pace. 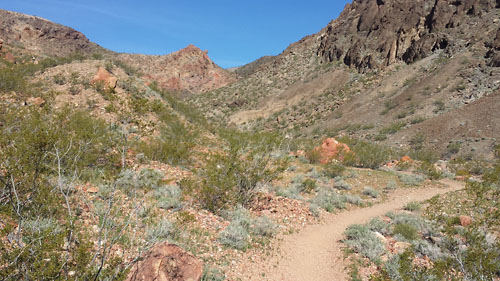 Streamers, and marking flags dotted the single track, as we made our way along the trails outside Boulder City. Near the 4.5 mile mark, we started the first climb of the day. From the bottom, it just looked like a nice climb up a valley. A mile later, we hit ‘The Switchbacks” – including approx. 500 foot climb over a mile, it was worse in person, than it looks written down. Had a chance to chat with another local runner I follow on Instagram, Maia Detmer, we climbed the switchbacks together, discussing races, travel & running. It was a nice distraction from the course.

At the top, some signs were still present from prior events, causing us to take a slight detour. Fortunately, we were back on the proper route soon, bombing down a four mile desert descent.

As I learned while running trail races within the confines of Red Rock National Conservation Area’s trail system, the beauty of the desert is one-of-a-kind. Bootleg Canyon’s trail system was eye catching, and challenging, all in one.

By mile 14, I could sense something wasn’t quite right. I was running well, however, the temperature was climbing, and my water supply was dwindling. Refilling the GeigerRig’s bladder at the next aid station, I continued on.

Reaching the Southernmost point on the course, there was another aid station, visited by a morose contingent of competitors debating with themselves, as to whether or not continuing was wise. I was one of those runners.

My stubbornness, and desire to complete what I started overruled my doubts, and off I went, back up the course.

From here, things become a little bit of a haze. The heat was really getting to me, which is odd. My legs didn’t want to work right, but I continued on. At some point, I refilled my GeigerRig for a second time, which, for those who are counting, meant I had already emptied 3 liters of water from my pack.

Mile 22 was in my mind, for quite some time. Why 22? Because that is the point where we had to go back up the switchbacks. They were tough early in the morning with company, in the sun, while tired, they were even tougher. One foot in front of the other. That is all I could ask of myself. Stopping at one point, I turned to take in the view, and spotted someone lying beside the trail at the base of the valley. Yelling down to make sure they were OK, they said they just needed some shade, and mentioned their surprise at being spotted. 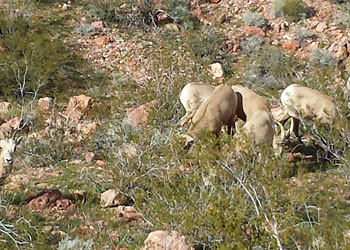 Turning my head just a little, some motion caught my eye. A herd of big horn sheep were grazing on the hill, beside the trail! Watching them do their sheep thing for a moment, I turned to continue up the course. Hitting the next section of switchback put me facing them once more. Something spooked them, and up the valley they went running… right toward a runner who rounded the mountain, and was nearly trampled by the sheep! They jumped in front of, and behind the runner, fortunately, it was only shadows hitting the runner.

Next thing that sticks out, was looking back, and seeing a runner approaching with a dog. As they got closer, realized it was Ron Gallagher, owner of Maximum Velocity Physical Therapy, and his Weimeraner. Ron helped fix my hip, knee, and shoulder issues with simple exercises, stretches, and some weight training. We chatted for a moment, before they continued on. I assured him I was OK, and would see him later on.

None too soon, I was on the final trail toward the finish line. My GeigherRig was nearly empty again (4.5 liters of water), my Gatorade was long gone, and my sweat crusted face was tired of being in the sun.

Finding a deep reserve of energy, I had a good run into the finish line chute, received my medal, and hobbled toward the finish line expo. Desert Dash does a great job of lining up vendors, and making the finish line an event, not just a “here’s your medal, there’s some shade” kind of finish line.

Given my very high water intake & thirst, plus instability of my legs, and a huge hunger I made a tough decision. Rather than risk injury, or worse, I decided to skip the night race. I could have dropped down to a 5k, to earn a limited edition Pilsner glass. It wasn’t to be. The trail was technical during the day, couldn’t imagine at night, with very tired legs.

This was my slowest marathon ever, at 6:59:xx. In addition to the slowest time, this was the absolute most difficult thing I have ever completed in my life, to date. I can’t wait to try it again!

A side note about the weather this race day was that the low was higher than the historical highs for the event. 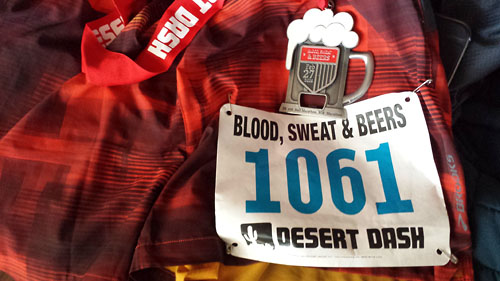