Ok, maybe I have forgotten to post here since the day before my first half.

Just before the start, my runner friend from Vegas found me and we decided to pace each other for as long as we could. Once one was too tired to keep up the pace, or wanted to speed up, we would see each other at the finish line. That ended up being unnecessary, as we both kept pushing the other to keep on running. We did not stop to walk once, even though, we found out later, we both wanted to! We kept talking the entire race, catching up to an passing pace groups the entire way. We passed the 2:00 pacer as we were approaching the finish line and wrapped up the race in a 1:57.27 (chip) time! Not a bad first half marathon. 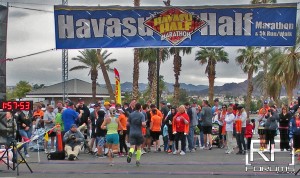 Then, I took three months off to recover from some injuries. I am guessing those injuries may have had something to do with running at race pace for 4.5 miles the Monday following the Havasu Half. Or, with my undertraining, overusage and no real plan for recovery.

Fast forward to October and I am two weeks away from picking up my packet for the first (and only?) Really Big Free Marathon. If you follow their Facebook page, you would have been reading a TON of drama from the miscommunication, incorrect assumptions and everything else that goes along with ‘free’ and the internet.

The course has changed from a scenic run though Henderson/Green Valley area to a Lake Las Vegas based route to finally landing on the same route as Calico Racing utilizes. From what I understand, Henderson residents were not too happy during the last triathalon that clogged up roads and was inconvenient for a few hours. Knowing how the permit process works out here, I am pretty sure the secondary route was denied due to some strange decision.

That landed us on the River Mountain Loop Trail. It was finally announced this week that the Really Big Free Marathon and Really Big Free Half Marathon will feature 2,000 runners. I am hoping that not too many of them are so angry at having to find transportation to the Lake Mead area two days in a row AND pay $10 a car to get into the Lake Mead Recreation Area, that they are rude and inconsiderate. Somehow, I think that once the race starts, people will forget about the troubles getting to that start line and enjoy the run.

In addition to preparing for the RBFM, I am also volunteering at an exchange for this year’s Ragnar Relay. I know that I can’t commit to another long distance race so close to my first marathon, still though… I am going crazy knowing that I am not running Ragnar Las Vegas this year!

On another side of running, following the loss of our friend and former Ragnar teammate, Ron Kirk (known by the Hash community as ‘Bloody Asshole’) – we are putting together a memorial race for January, 2013. Proceeds from the race will go to benefit Red Rock Search and Rescue, the volunteer, non-profit organization that was formed specifically to find Ron.

We have a few courses marked on the computer, have driven some of them, now it is time to go and see if things look the same on foot as they do on the computer.

As this process moves forward, I am sure we will experience some learning pains and kinks. It will all be worth it if the run goes well, people can talk about Ron and we raise some money for RRSAR.

After that, I am contemplating an ambitious undertaking in March, April and May. While I would love to get into longer distances, even going so far as Ultra running… The personal challenge to try and be consistent and strong for three half marathons in three months seems very appealing.

Already on the books, I have the Really Big Free Half Marathon in Carlsbad, California, pretty sure a return to Lake Havasu City for the Havasu Half Marathon is due and the third race is escaping my memory at this moment. Any way, it would be a good challenge and may push me to go for some longer distances before the end of the year.

Be the first to comment on "Fear not blog, you have not been forgotten."