Looking at my race calendar for 2016, I realized that there was not a half marathon lined up for January. This could not be! Apparently, I am trying to get a half, and full marathon (at least) for each month of 2016, in my efforts to make it to 2016 miles for the year. Also, at least a half a month should help me “Moon Up” within the Half Fanatics running group.

What is an obsessed racing runner to do? Look at local race organizations, and see what races are available. That brought me to the BBSC Endurance Running website. They purchased a number of races from Calico Racing within the last 12-ish months. In 2015, I ran a full in January, when it was Calico Racing’s Running From An Angel. This year, knowing a full is next weekend, I opted for the half, over a two-loop full race.

Keeping in mind that I do have a trail full marathon on January 16th, I had it in my mind that I would take it easy on the half, enjoy the scenery, and not abuse my legs, while keeping the race at race distance.

The sunrise over the mountains surrounding Lake Mead made for an awe-inspiring sight. Taking in the natural beauty of the orange, and pink hued sky, I tried to relax as much as possible. Some friends from Instagram spotted my wife and I talking with a fellow Half Fanatics member, and increased our circle of those chatting.

Ryan is on his chase for 30 halves before his 30th birthday, and was hoping for a fun day on the River Mountain Loop Trail. Gerard smoked me pretty well at Saints & Sinners last September, so I was anticipating a similar effort on this race morning. Joking with Gerard at the start line, I told him that I was going to draft him, and not to stop suddenly.

As the countdown approached zero, our excitement grew. At zero, the air horn went off, and away we went!

Climbing up, out of Boulder Beach, we made a right onto River Mountain Loop Trail. Dan Kuch was already pulling away from the pack. During a straight section of the course, I looked up, and was able to count each of the competitors ahead of me.

Realizing I was in 6th overall, about to overtake the 5th place runner, I knew I wasn’t going to let myself have an easy run. I settled into a comfortable pace, and went with it. The sun was mostly blocked by the clouds during the early miles, letting us run in the nice, cool morning.

The trail rose and fell, meandering around the hills around Lake Mead. For the most part, all that could be heard were footfalls, and the occasional call for Water & Gatorade, or urging on of runners. On one stretch, the medical staff, and their four wheeler had to drive past. Of course, it was right on a section covered in dirt, kicking up a cloud of dust that coated my teeth, and tried to infiltrate my eyes.

Passing beyond the dusty section, it was back to peaceful, steady running. It seemed like #4 overall was getting closer, and further, and I was not yet ready to surge forward to try and challenge his spot.

Fortunately, I had ran this trail in the past, during my first full marathon, it helped me pass the miles, as I remembered spectators at different points, their signs, and how far I have come since that experience.

We started the climb out of the tunnels, around another bend, and behold! The Turn-Around! Dan Kuch was already past us, overall 2 & 3 came back, and #4 was not too far ahead. We made it to the turn-around, with Blue Hat and Gerard right on my heels.

Now, though, the course was even more in my favor. The furthest point on the course was in the middle of a sizable hill. That meant, my favorite running: Downhill!

Kicking it up a little bit, I cruised down the hill, with my pack in tow. I was able to cheer on the other runners, as we approached each other. There were a few other runners I saw with New York City Marathon gear on, which was pretty cool.

Getting near the 10k turn-around, the course began getting a bit crowded. I had to slow significantly, as there were sections that were people, from one edge of the course to the other. Those crowds only stuck around for a short while, and the trail was back to a nice, open path.

There was a left turn for 5k/10k runners to head to the finish, while full and half marathoners were to go straight. Around that point, the full marathon runners started coming back from the second turn-around.

At the second, and last, turn-around point, the volunteer was a character. With a sign on the edge of the course, and one in the middle, he stood just beyond the signs saying, “Turn around here. Half, or Full, you turn-around here. Don’t run past me, go back now!” As well as other similar things that I can’t recall. Made me smile and crack up a little as I was able to see how close the next runners were behind me.

Shockingly, Gerard was not there. Blue Hat, and Orange Shirt were, though. I don’t know when or how Orange Shirt got there, but he made it. Plus, they were not far behind me. My competitive spirit gave my legs energy, as I was not going to *let* anybody pass me. They were going to have to earn 5th overall!

Blue Hat tried to surge past me a couple times. Each time he surged, my legs came to life again, and held him off. He fell back in behind me. It was only a matter of minutes before we made that last right turn back down to Boulder Beach.

Another downhill lay before us, add to that my practicing a strong finishing “kick” – 5th was mine to lose. Sailing down the hill, weaving around other distance runners, I managed to hold off all challengers! 5th overall was mine, on this day I planned to run easy.

Talking with Gerard after the race, he recounted how after the last turn-around we just pulled away from him. Knowing how strong of a runner he is, I was shocked that things played out that way. 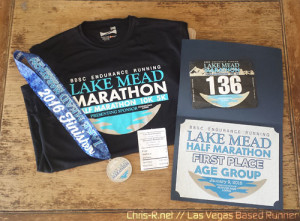 With the way the top three runners worked out, while I was the 2nd of nine 30-39 year old male runners, I captured the top spot, Gerard picked up the second age group spot.

I am still in disbelief that I managed a 7:2x pace for 13.1 hilly miles. My PR is a 1:33:xx in Cedar City, with the massive downhill. What lies ahead, as I run more, race more, and challenge myself with each new race?